Yulia Navalny among scores arrested during protests in Russia 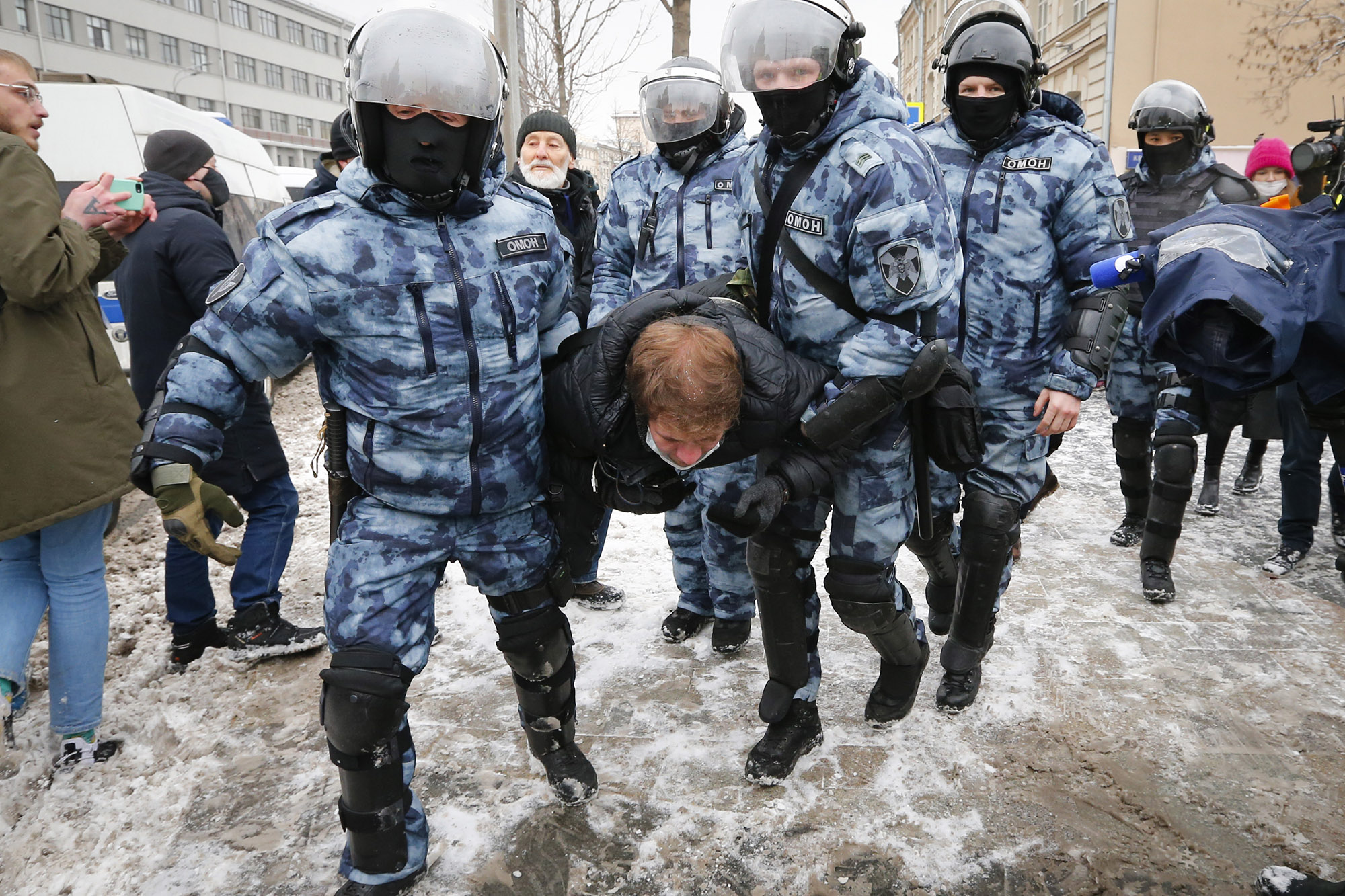 The wife of jailed Kremlin critic Alexei Navalny was among more than 3,000 arrested Sunday during ongoing protests across Russia decrying her husband’s imprisonment.

Yulia Navalny was detained during a huge rally in the capital, Moscow, at least the second time she has been detained during the mass protests in support of her 44-year-old husband who survived a poisoning last year.

Officials had locked up much of the capital — closing subway stations near the Kremlin, cutting bus traffic and ordering restaurants and stores to stay closed — and threatened stiff prison sentences for protesters.

But thousands took to the streets Sunday, yet again engulfing many cities in the largest, most widespread show of discontent that Russia has seen in years.

Arrest watchdog group OVD-Info said Sunday that police had detained nearly 2,300 people, a figure that had risen throughout the day in Russia’s 11 time zones.

It was not immediately clear if Yulia was still being held or had been charged. She had posted a photo of her marching in Instagram, and earlier posted a pic of her family, noting others have also been arrested.

His brother Oleg, top aide Lyubov Sobol and three other people were on Friday put under a two-month house arrest on charges of allegedly violating coronavirus restrictions during last weekend’s protests.

Navalny’s spokeswoman, Kira Yarmysh, was detained Saturday over virus measures, the same day she was due to walk free after a nine-day jail term for violating protest laws, Agence France-Presse (AFP) said.

“If we remain silent, then tomorrow they will come for any one of us,” Julia wrote, saying her husband was targeted because he “dared to survive” a poisoning that he blames on President Vladimir Putin.

In Moscow, hundreds marched across the city center, chanting “Putin, resign!” and Putin, thief!” a reference to an opulent Black Sea estate Navalny had claimed was built for the Russian leader, which Putin denies.

Crowds later moved to the Matrosskaya Tishina prison where Navalny is being held, but met phalanxes of riot police who pushed the march back and chased protesters through courtyards, detaining scores.

An estimated 2,000 marched across Russia’s second-largest city of St. Petersburg, and occasional scuffles erupted as some demonstrators pushed back police who tried to make detentions.

“The whole centre is cordoned off,” Natalya Grigoryeva, who came to the St. Petersburg rally with her daughter, told AFP. “And who is this all against, against their own people?”

The city of Novosibirsk in eastern Siberia saw one of the biggest rallies, with several thousand people marching across the city. Over 100 protesters were detained.

In the far eastern port of Vladivostok, at least 120 people were detained after protesters danced on the ice and rallied in the city center.

The United States urged Russia to release Navalny and criticized the crackdown on protests.

“The U.S. condemns the persistent use of harsh tactics against peaceful protesters and journalists by Russian authorities for a second week straight,” Secretary of State Antony Blinken said on Twitter.

Navalny’s detention was ordered by Moscow’s prison service in connection with alleged violations of a suspended prison sentence in an embezzlement case he insists was bogus.

He was arrested as soon as he stepped off a plane in his homeland from Germany, where he had been treated for his near-fatal poisoning with a Soviet-era nerve agent.