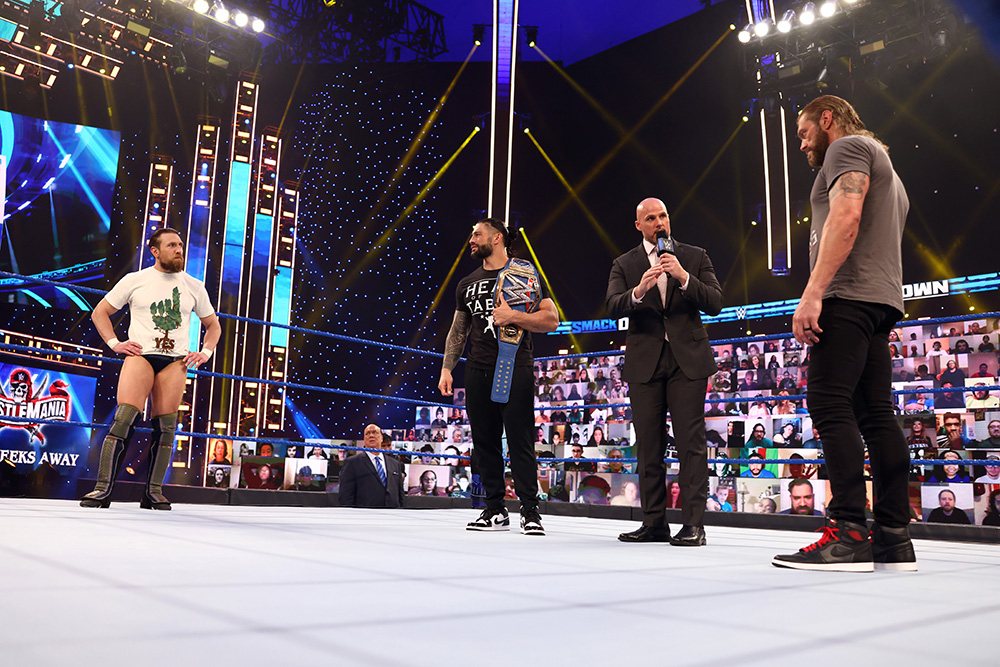 The first night of WrestleMania 37 is in the books, and for the second straight year we are getting a Night 2 (April 11, 8 p.m., Peacock). Here are five things to watch for on Sunday at WrestleMania, taking place in front of roughly 25,000 fans at Raymond James Stadium in Tampa, Fla.

There can only be one Universal champion walking out of WrestleMania 37, and we are in for one heck of ride finding out who it will be. Roman Reigns, Edge and Daniel Bryan each has a very personal story around this match. Edge, who has rediscovered his cutthroat Rated-R Superstar persona, won the Royal Rumble and is trying to regain a championship he never lost when he retired due to a neck injury the day after beating Alberto Del Rio for the world heavyweight title at WrestleMania 27. Daniel Bryan, who has said this might be his last WrestleMania with his full-time WWE contract up soon, is trying to recreate his joyous moment at WrestleMania 30, when he won the title in another triple-threat match. Edge and Bryan, who has a history of concussions, both thought their careers were over at one point. Reigns, a cancer survivor whose leukemia is in remission, opted out of WrestleMania 36 last year because of COVID-19 concerns with twins on the way. He returned at SummerSlam and is in the middle of the hottest run of his career.

There is no bad winner here. Bryan entering the match means Reigns or Edge could lose without being pinned. It gives WWE a bit of a safety net. That’s especially key for Reigns. It could allow him to chase a babyface champion going forward without having been pinned or submitted, despite Bryan making him “tap” at Fastlane. We may get to see a very different side of this usually cold and calculated Roman Reigns character if he loses.

Rhea Ripley against Raw women’s champion Asuka likely wasn’t the original plan for this match. “The Nightmare” was added late after Charlotte Flair contracted COVID-19 and went through a bizarre false pregnancy drama with WWE after her fiancé Andrade left the company.

There has been very little back story presented for this match. Ripley debuted on Raw a few weeks ago and challenged Asuka, two badass women fighting for one title. This is also a bit of a dream match for Ripley, who has wanted to wrestle Asuka since seeing her in Japan as a teenager. It also brings Ripley’s WrestleMania story full circle — she was supposed to debut on the main roster at WrestleMania in Tampa last year before the pandemic changed everything.

Asuka hasn’t been booked great during her title run. Her last official title defense came Nov. 23 on Raw against Lana. Though Ripley is more of a fill-in here, WWE might see it fit to freshen up the top of the Raw women’s division. Asuka’s nemeses, Shayna Baszler and Nia Jax, also will be defending their women’s tag team championships on Night 2.

The Fiend is back and he’s better than ever … well, sort of. Bray Wyatt’s character returned in a new, charred, more horror-movie form — after some foreshadowing by a ghoulish Alexa Bliss — to get revenge on Randy Orton for “burning him alive” at the TLC pay-per-view in December.

It’s unclear if this match will be done cinematically or live in the ring or a little of both. Will the The Fiend’s signature red lighting come back? His presentation has been different: There’s been no trace of Wyatt’s Firefly Funhouse character and it seems as if Bliss is controlling The Fiend rather than the other way around. You would expect Wyatt to go over big here. It better be good. The Fiend really needs a spark for this return. His first run had memorable stories, but more than a few forgettable matches.

Kevin Owens vowed last year before WrestleMania was moved that he would jump off the pirate ship at Raymond James Stadium, and there is no reason to think he won’t deliver on that during his match with real-life friend Sami Zayn. The match will include YouTube sensation Logan Paul in some capacity. Paul is said to be coming as Zayn’s guest, but Paul sided with Owens and mocked the trailer for Zayn’s conspiracy documentary on a recent episode of SmackDown. It will be interesting to see how WWE capitalizes on Paul’s mainstream reach (2.7 million YouTube followers), but expect quite the show and storytelling either way from Owens and Zayn.

WWE made Big E’s Intercontinental championship defense against Apollo Crews a Nigerian Drum Fight, whatever that means. Crews’ heel turn has seen him claim to be Nigerian royalty – with a character that mixes tropes from “Black Panther” and “Coming to America.” It’s given his character a direction at least. A gimmick match was needed here considering Crews hasn’t claimed the title in his past four tries since January, including getting pinned twice. If Big E’s momentum continues and Crews gets a viable story arc for his updated character coming out of this lackluster feud, consider it a success.