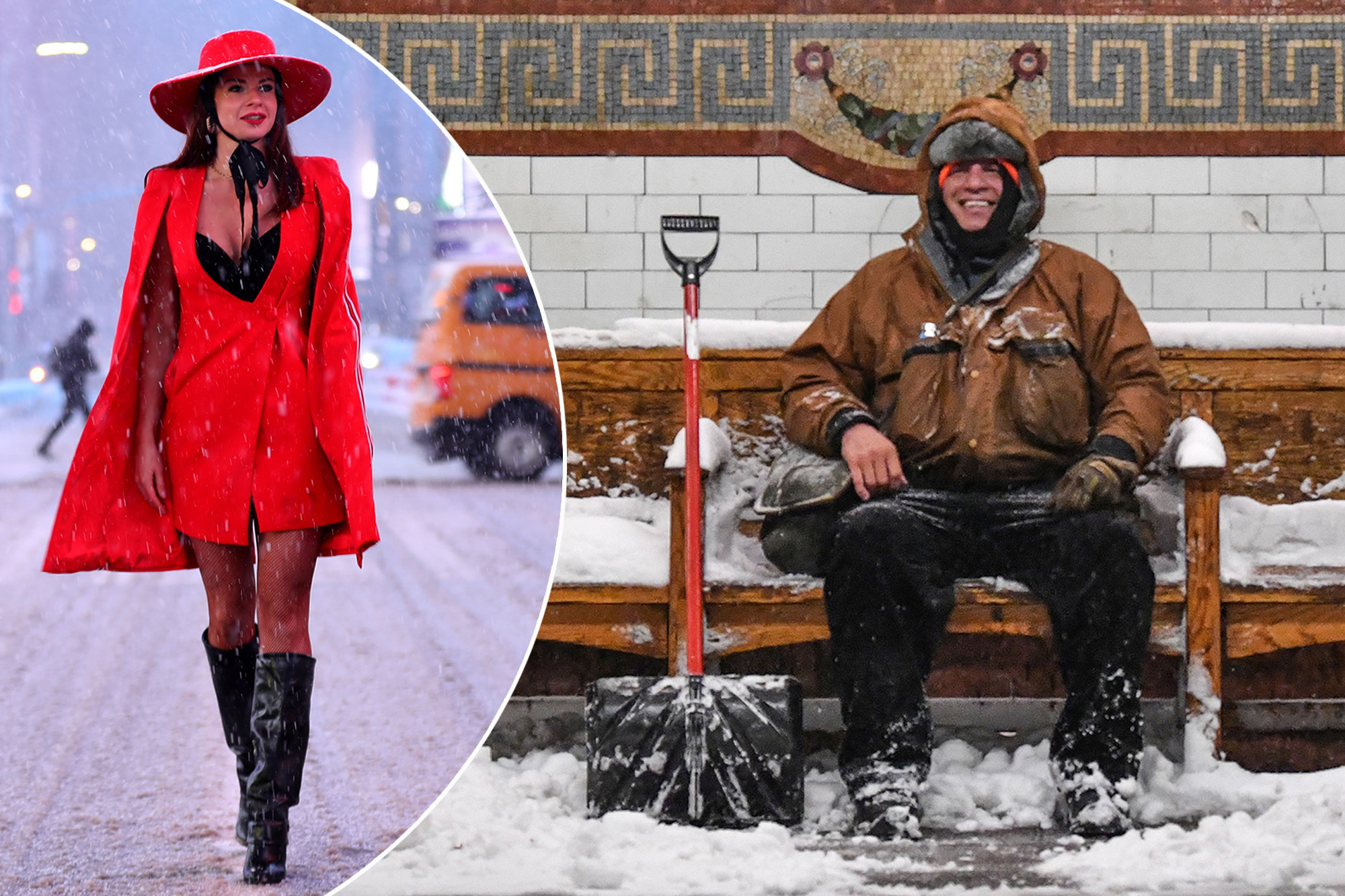 New Yorkers on Monday said “you got nothin’” to Winter Storm Orlena — as they ventured out to exercise, explore or just do their jobs amid a snowy blast that could hit two feet before all is said and done.

Model and tour guide Veronika Dudka left her home early Monday morning to hit Times Square around 7 a.m. before the conditions got too bad so she could pose for photos and share snaps of the famed tourist hub draped in white for her 93,000 followers.

“I do online tours right now because all the people can’t come to the USA right now, so I just do online tours on my Instagram on IGTV,” Dudka, 30, explained of her “virtual tourists” who hail from Italy, Ukraine, Russia and “all over” the world.

The Ukrainian native said she didn’t mind the cold conditions and said the below freezing temps, 30 mph wind gusts and rapid snowfall made for “a really nice day.”

Joshua Cheung from Fort Greene decided to use the snowstorm as an opportunity to get some exercise — by offering free snow shoveling services.

“Need some exercise and an excuse to get it, so I’m offering some help here. You’re welcome to pay me if you want, but I don’t need it,” Cheung wrote on the NextDoor social media platform, a website that connects neighbors.

“Note, salt not included unless supplied by you,” Cheung wrote.

The Brooklynite wasn’t the only one out looking for exercise amid the storm — clips posted to the What Is New York Twitter page show a person jogging through Coney Island… with only their shorts on.

Other clips show a myriad of bizarre scenes including an NYPD patrol car doing donuts on the fresh, unplowed powder and an apparent musher on a four-wheeled carriage gliding down a snowy street with two sled dogs leading the way.

One video showed a man decked out in a red suit and top hat rapping in the streets overnight with a portable amp and microphone.

“You’re probably staying in your home hot chocolate on clubhouse,” the rapper crooned, referencing an app that’s grown popular amid the pandemic and allows for group video calls.

Other New Yorkers, like Lan Kwit, 48, were spotted using snowshoes and skis to traverse unplowed sidewalks and get around town while others used the day to kickback and drink.

Workers from the Bronx Beer Hall decided to build a bar snow castle when they had to close their doors for the storm and posted a snap on Instagram of them drinking beer outside as the flakes fell.

“It’s Monday and The Bronx Beer Hall is C-C-C-C-C-C-C-L-O-S-E-D so we can try to remake the bar with snow. We’ll reopen TOMORROW 12PM – 6PM. Stay healthy & safe!” the post states alongside a photo showing the makeshift, icy bar holding up a keg filled with perfectly crisp brew.

Rodney Hamlin, a 53-year-old MTA bus driver, spent most of Monday moving busses around the Fresh Pond Depot so workers could add chains to the wheels — a safeguard that’s hardly a match for Orlena’s icy onslaught.

“It’s not easy. Being a bus operator, you’ve got to have six eyes. You got to look ahead of you, beside you, behind you. You always got to look out for people in front of you that don’t look out, that don’t pay attention,” the 18-year veteran told The Post.

“You could be going just like 15 miles an hour or 10 miles and hour and you hit the breaks and just keep going. That has happened to me…. when you try to stop 40,000 pounds and it’s sliding and you have no control over it, just imagine how fast your heart is beating.”

Hamlin insisted the MTA’s drivers are some of the “best” around because of their intense, military-like training but “all that comes to pass when you’re out here driving in a snowstorm.”

The record-breaking storm, which is expected to drop as much as 28 inches of snow on the Big Apple, wasn’t even enough to keep the Naked Cowboy at home.

The famed performer was spotted in Times Square early Monday afternoon strumming his guitar with nothing but a hat, boots and undies on as the real feel temps plunged to 16 degrees.

This could be best evidence yet of Jimmy Hoffa's NJ grave

Javits Center vax should be reserved for Manhattan residents