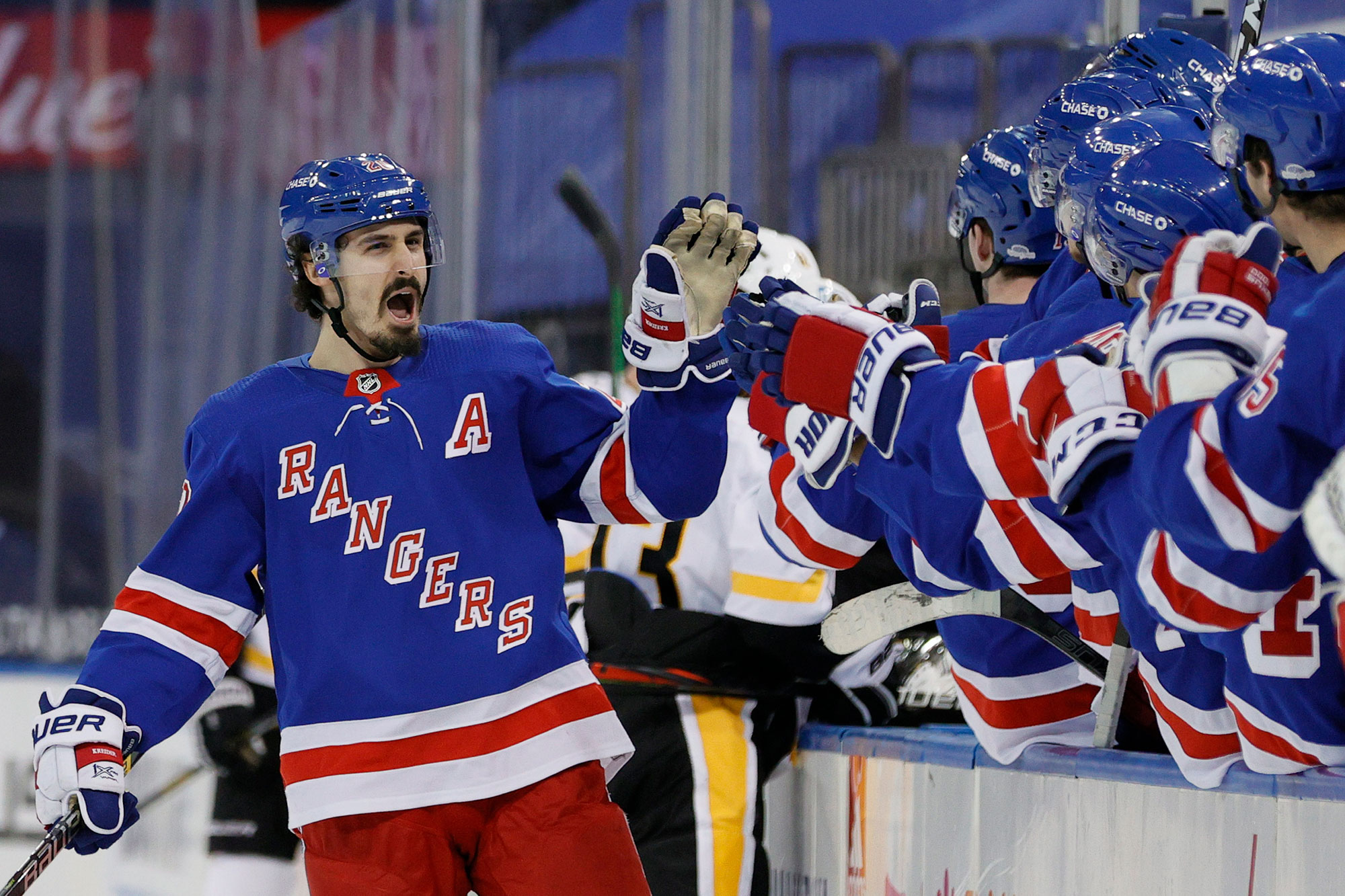 While New York City is braving the blizzard, so are the New York Rangers.

On the same night that Rangers brass had to address its decision to part ways with the team’s second-highest paid defenseman Tony DeAngelo, the Rangers pulled out their third win of the season behind a third-period power-play goal from Chris Kreider to defeat the Penguins 3-1 Monday night at Madison Square Garden.

The Rangers had only scored two third-period goals and hadn’t registered one in the last five games heading into Monday’s contest. Kreider broke that streak at 11:10 of the final frame with a redirection of a no-look shot from Adam Fox at the top of the zone.

Artemi Panarin chipped in an insurance tally with a second left on the clock, in addition to two assists, to complete a three-point performance.

Rangers goalie Igor Shesterkin picked up his second win of the season, turning aside 25 of the 26 shots he faced. He made nine saves in the final 20 minutes to secure the victory.

Aside from being without DeAngelo, the Rangers lost Kaapo Kakko to the COVID-19 Protocol list and recalled Jonny Brodzinski from AHL Hartford for his first game in a Rangers uniform. Anthony Bitetto, who had been with the team’s taxi squad to start the season, replaced DeAngelo for his Rangers debut as well.

To add further pressure to the Rangers’ already depleted lineup, defenseman Brendan Smith collided with Brandon Tanev at 17:12 of the first and went straight to the locker room, where he remained with an upper-body injury.

The Rangers were forced to roll with five defensemen for the rest of the night.

Whether it was the collective inexperience of the lineup or the Penguins’ uncanny strength managing the puck, the Rangers took too many undisciplined penalties. They started both the second and third periods on the penalty kill as a result of infractions in the final two minutes of each frame.

Julian Gauthier, who hadn’t played since Jan. 19 against the Devils, was called for holding minutes after the Rangers took the 2-1 lead to force them to compete shorthanded for the sixth time in the game.

The Rangers’ penalty-kill unit staved off all six of the Penguins’ man-advantage opportunities, while also acting as their strongest offensive weapon throughout the night. Chris Kreider nearly capitalized on a short-handed breakaway and K’Andre Miller missed another opportunity out of the box in the second period.

The Rangers knotted the game 1-1 on a delayed Penguins penalty, with an extra skater on the ice, as Kevin Rooney registered his second goal in as many games at 17:42 of the second period.

The Penguins came out of the first period with the lead for the third time in their last four games against the Rangers. Jason Zucker quickly took the puck off the boards and caught Shesterkin far out of the crease, stuffing it in for the 1-0 score at 9:05.